The difference between the Voice VLAN feature and Auto VOIP feature

With the development of network technology, the application of IP Phones has become more extensive and popular. But different manufacturers’ IP Phones may have different features. For example, some new versions of IP Phones can support LLDP protocol while the old version cannot. And some can deal with tagged packets while some cannot.

According to their different performance, there are two application scenarios as below: 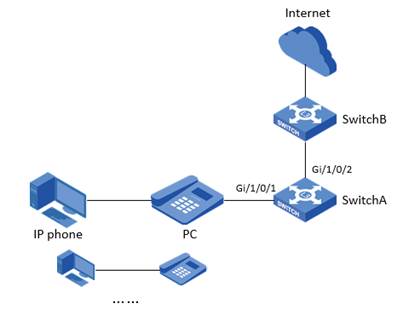 Topology A: The voice traffic and data traffic are passing through the different ports of Switch A. In this topology, the IP Phone doesn’t need to support LLDP protocol and to deal with tagged packets.

Topology B:  The voice traffic and data traffic are passing through the same port of Switch A. It requires the IP Phone to support LLDP topology and deal with tagged packets.

To ensure that TP-Link Smart/Managed switches can match the vast majority of IP phones, and can work with the IP Phone to establish the voice system in the above topologies, we define two features on our new GUI Smart/Managed switches: Voice VLAN and Auto VOIP. They apply to topology A and topology B respectively. Because they apply to different scenarios, their settings are different. There are four aspects you need to pay attention:

Part 1: They are different when creating voice VLAN.

When doing settings for the Voice VLAN application topology, we only need to create a voice VLAN ID and choose the uplink port in the 802.1Q VLAN feature. There is no need to add ports that are connected to IP phones when creating VLAN. The reason is as below:

The example of configuring voice VLAN status for the port

When doing settings for Auto VOIP application topology, unlike the Voice VLAN feature setting, we need to add the ports that are connected the IP phone to the target VLAN and set the port’s Egress rule when creating VLAN in 802.1Q VLAN feature.

As shown below, when creating VLANs, go to L2 features > VLAN > 802.1Q VLAN, click Add to do VLAN config. Set port 1 in voice VLAN as Tagged port, and set port 1 in data VLAN as Untagged port.

Port 1 in voice VLAN is Tagged

Port 1 in data VLAN is Untagged

The example of configuring OUI information in Voice VLAN feature

When packets reaching to the port which is enabled Voice VLAN, the switch will detect if the traffic is voice traffic according to its OUI information. The voice traffic which matches the OUI will be sent to voice VLAN. The other traffic will be forwarded to the default system VLAN.

But the Auto VOIP feature doesn’t need to set OUI information of the IP Phones because it doesn’t identify the voice traffic by reading its OUI information.

Part 3: They are different in setting priority for the voice traffic

Usually, when setting Voice VLAN/Auto VOIP, we’ll set priority information for the voice traffic to ensure it can be transmitted preferentially if there exist congestion.

But in Auto VOIP, you can choose different interface mode according to your requirements. Then you can set different priority types.

The voice information configured on the Auto VOIP is sent to the IP Phones by LLDP communication between the switch and  IP Phones. And the voice information contains the voice VLAN tag and priority settings. Only the LLDP communication is successful, the traffic from the IP phones will take the correct tag and the voice traffic will be transmitted successfully. So it needs to configure the LLDP-MED feature at the same time. That’s also the reason why this feature requires the IP Phones should support the LLDP protocol.

After doing settings for Auto VOIP, it needs to enable LLDP-MED status for the port which is connected to the IP Phone. Then the switch will tell the IP Phones voice information when they communicate with LLDP packets. About how to configure LLDP-MED, please refer to the CG of LLDP

And for detailed configurations for Voice and Auto VOIP feature, please refer to the CG of QoS and the specific switch’s User Guide.