How to configure the default gateway of the smart and managed switches using the old GUI?

The introduction of the default route

For example, we assume a network shown as the picture below 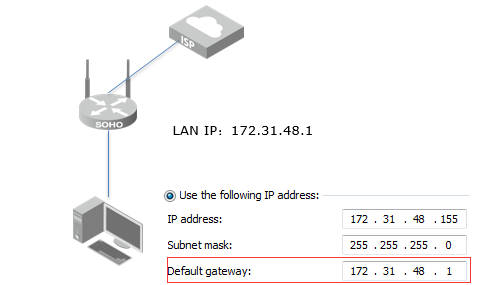 After setting the Default gateway as the router’s LAN IP 172.31.48.1, the PC will generate a default route automatically.

The default route consists of three parameters: Destination, Subnet Mask and Next hop (Gateway) as shown in the picture above. The Destination IP and Mask 0.0.0.0 means arbitrary destination IP addresses that are not matched by other route entries. According to this default route, all the traffics that go to the Internet will be forwarded to the gateway router (172.31.48.1). Then we can say, the PC can access the Internet if all the other settings are OK.

How to configure the default gateway in the T series switches

When we want to use NTP (Network Time Protocol), access the switch remotely, or some other functions that need the switch acting like a computer that can access the Internet by themselves, we need to configure the default gateway route for the switch as well.

We still assume a network shown as in the picture below 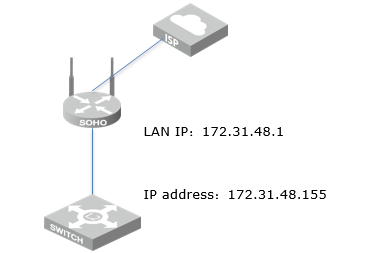 1) For TP-Link L2 switches without IP routing function like T1500 series switches, we just need to designate the Default Gateway in the System-System Info-System IP-IP Config like a Windows computer as shown in the picture below. Then the switch will generate a default route for Internet as well.

As shown in the picture above, the Destination and Subnet Mask 0.0.0.0 means arbitrary destination IP addresses that are not matched by other route entries. The Next Hop is the router’s LAN IP which means all the traffic to the Internet will be forwarded to the gateway router. The Distance is an optional parameter, we can leave it as default or set it as 1 in this situation.

By the way, if you want to change the management IP address (by default, it is the interface IP of the VLAN 1) of the L2+/L3 switches, you need to go to Routing-Interface List-select VLAN 1 and click Edit to change the IP address.