How to configure IPSec LAN to LAN VPN for multiple subnets using the new GUI?

This article mainly introduces how to configure IPSec LAN to LAN VPN for multiple subnets, if you have any other problems about how to configure VPN connections, please refer to Configuration Guide for VPN.

Apart from configuring VPN connections on VPN Routers, we shall also configure Static Routing and Multi-Nets NAT on VPN Router which contains multiple subnets (In this example it is VPN Router_2).

When the IPSec VPN Tunnel connected, you could see entries on VPN > IPSec > IPSec SA as follows:

Static Route is required to make sure that packets sent from the remote subnet 192.168.10.0/24 could be forwarded to different subnets. Here we shall configure the IP address of switch as the Next Hop for packets send to each subnets different from LAN of VPN Router_2 on Transmission > Routing > Static Route as follows:

On L2+/L3 Switch, we shall configure Static Routing and Interface so that packets in different subnets could be transmitted between this L2+/L3 Switch and VPN Router_2.

We need to configure Interface for each subnets so that packets could be forwarded between this subnet and L2+/L3 Switch. Go to L3 FEATURES > Interface > Interface Config > Edit IPv4 to configure it as follows 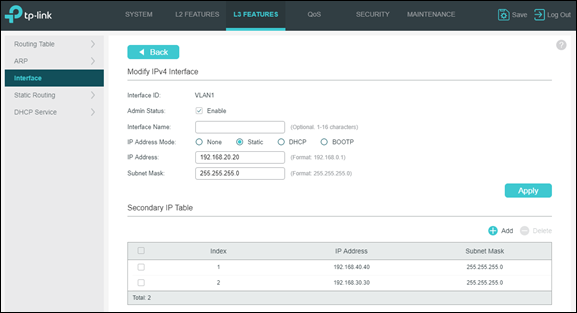 Here the Static Routing entry performs as default gateway. It would send all packets to VPN Router_2 to forward to the remote site of VPN Tunnel or access Internet. Go to L3 FEATURES > Static Routing > IPv4 Static Routing to configure it as follows:

Finally, after configuring Interface and Static Routing, we could the routing table on L3 FEATURES > Routing Tables > IPv4 Routing Table as follows: