This article will share how to use these features. We focus on how to realize the settings on the Omada Gateway, refer to the simple network topology shown below, there are two departments connected to an Omada Gateway with unmanaged switches, the computers need access to the Internet, but not to the computers in different departments. 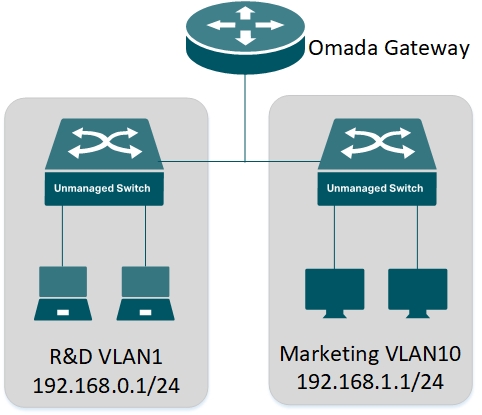 To block access between computers in different departments, ACL is introduced to manage the network behavior. Go to Firewall – Access Control, and click the Add button to create a new ACL entry. Enter the settings as shown below, the “LAN -> LAN” interface type means that this ACL entry is for inter-network traffic. After saving, the ACL takes effect, the computers in the R&D department and the computers in the Marketing department network will never be able to access each other.

How to build up a multi-net network via Multi-Nets NAT feature on the TP-Link router with L2+/L3 switches?