This article will introduce the VLAN configurations of the LAN ports on Omada Gateway in Controller mode, which will help to connect a non-Omada switch.

Note: LAN port indicates the Ethernet ports on Omada Gateway, while the default network is also named LAN. To avoid ambiguity, this article will use “default network” to refer to the “LAN network”.

Suppose there are three networks, as follows. 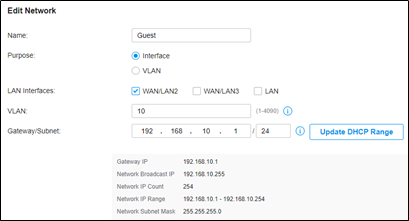 Then VLAN configurations of all LAN ports are as shown in the table below.

When you create a new VLAN Interface/Network, add a LAN port to that, then the port will be able to forward data from this network with VLAN Tag. You can set the ports on the switch and EAP according to your network requirements.